Today I bring you a review for one of my most anticipated releases of the year: Don’t Ask Me Where I’m From by Jennifer De Leon! ✨

I’m actually pretty delighted cause I wasn’t expecting to post today, but I actually managed to whip up this review quite quickly after finishing the book! WHO AM I??? 😱

But anyway, this one’s a bit on the shorter side but I hope y’all don’t mind! 🤗 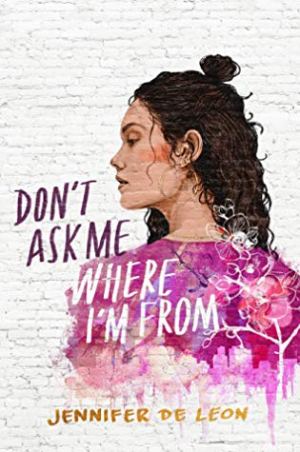 First-generation American LatinX Liliana Cruz does what it takes to fit in at her new nearly all-white school. But when family secrets spill out and racism at school ramps up, she must decide what she believes in and take a stand.

Liliana Cruz is a hitting a wall—or rather, walls.

There’s the wall her mom has put up ever since Liliana’s dad left—again.

And there’s the wall Liliana creates within herself, because to survive at Westburg, she can’t just lighten up, she has to whiten up.

But a wall isn’t always a barrier. It can be a foundation for something better. And Liliana must choose: Use this foundation as a platform to speak her truth, or risk crumbling under its weight.

In Don’t Ask Me Where I’m From, Jennifer De Leon unpacks the racism and white privilege in American schools, with a compelling biracial main character and weaving important themes of immigration and integration.

Liliana Cruz is her school’s best writer. When she’s not writing, she finds herself crafting miniature cardboard buildings or reading. When she gets the opportunity to be a part of the Metropolitan Council for Educational Opportunity (METCO) program, her mom encourages to go. She has to navigate a new predominantly white environment, while grappling with the fact that her father has been deported.

At first, I greatly struggled to connect with Liliana’s voice. It’s very “stream of consciousness”-ish and I didn’t know how to feel about a non-black POC speaking with a “blaccent”. I still feel kinda weird about it, but I’m not the right person to discuss this issue because I’m not black, so maybe some people will interpret it differently.

However, after a while, I definitely grew to accept the narration and think it perfectly captured Liliana’s sophomore voice. It was also a great reflection of her current situation: moving to a brand new school and trying to adapt. Shortening her name to Lili, keeping to herself, struggling to make friends, and socialize.

The best part of De Leon’s writing is how she shows Lili’s growth. She isn’t perfect. She’s actually quite naïve. She knows where her parents are from. But she barely knows about the history of Guatemala and El Salvador and her parents’ journeys to arrive to America. She doesn’t know that her parents are undocumented, not being able to realize why they can’t hold down jobs. But in Liliana, the author tells us that it’s never too late to grow and evolve. To take a look at yourself and recognize the changes you must make to your behavior, and the mistakes that you’ve made. To learn and get educated, if you really set your mind to it.

I really appreciated the family dynamics and how the author really nailed Liliana’s relationship with her mother. She is the epitome of a Latinx parent. Soft but a hurricane when necessary. I also loved to see how close Lili was to her younger twin brothers. I adore healthy sibling relationships in books and this was no exception!

Unfortunately, I don’t think the supporting cast was too well-written. I wouldn’t say they were bland but there was a certain lack of depth that I was left wanting. I feel like there was incredible potential to expand characters like Rayshawn, Jade, Brianna, and Génesis. I just really wanted to learn more about them as people. I also had a bit of trouble distinguishing different teachers at the school, but I think that’s more of a “me” problem.

Regardless of some of some of my slight issues, this was still a fantastic story, so I’m really excited to read more from Jennifer De Leon and see how she grows as a writer. The way this novel tackled racism was masterful and so well-done, so because of that alone, it’s worth picking up.

Thank you to Atheneum/Caitlyn Dlouhy Books for providing me an ARC of this book in exchange of an honest review and to Emmy @ Books Beyond Binaries for helping support this post!

Don’t Ask Me Where I’m From by Jennifer De Leon releases August 4th, 2020, and you can preorder it NOW via Amazon and Indiebound!

What are some of your most anticipated Latinx releases of the year? Are you looking forward to Don’t Ask Me Where I’m From?

I hope you all enjoyed, and I’ll see you on the next one!

My favorite thing to do in life is eat. And I guess, occasionally I read a book or two.

9 replies on “ARC Review: Don’t Ask Me Where I’m From by Jennifer De Leon”

This one is actually a release that I’m really looking forward to! Loved the review 🤗

Thank you so much Natalie! 🥰💕

[…] Netflix. They are one of the co-hosts of the Latinx Book Club, and their latest post is a review of Don’t Ask Me Where I’m From, which comes out later this year. Thank you so much for this insightful review, […]

First of all, the cover of this book is so pretty! Second, this was a great review 🙂

What a great review Caro!

[…] you can check out these amazing bloggers for their reviews: Rendz @ Reading With Rendz ; Carol @ Santana Reads ; and Lili @ Utopia State of […]